I’ve often said that I feel like every book I read is like a lesson in writing. With that in mind I decided to share some of my lessons. Today I finished reading Dead Ringers by Christopher Golden. Not a bad read all things considered.  I’d probably recommend it to someone looking to read a book in this genre. 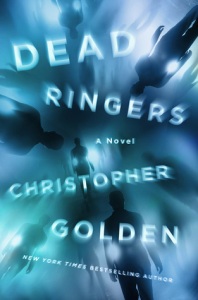 Tess Devlin runs into her ex-husband, Nick, on a Boston sidewalk, and is furious when he pretends not to know her. Afterwards, Tess calls his cell to have it out with him…only to discover that he’s in New Hampshire with his current girlfriend. But if Nick’s not in Boston, who was the man she encountered on the street? Then there’s Frank Lindbergh, who left his grim past behind and never looked back. But now that both of his parents are dead and he’s back in his childhood home, he’s assaulted by an intruder in his living room―a man who could be his brutal, violent twin…if it weren’t for the fact that Frank is an only child.

This book, in my opinion, has no plot. Don’t get me wrong, I’m not saying this is a bad thing. I mean, look at the sitcom Seinfeld.  It didn’t really have a plot either. This book is a ‘situation’ our characters find themselves in. There’s very little back story, so it’s really WHAM! and away we go into how they deal with the situation. Because I create detailed outlines of my novels, plot is very important to me, the evolution of my characters, their journey and how they change along the way. I really hadn’t conceived of writing a novel with no plot and wonder how one outlines such a novel. Certainly you’d have to do it differently than I do. Do I need so much plot? Something to ponder.

My favorite turns of phrase:

Here are some of my favorite passages.

“But there had been that moment when they’d first locked eyes, that instant recognition that said, hey, you don’t know me, but I see something in you, like some invisible thread connected them.” (page 19)

“When the starry-eyed belief in a lover’s perfection passed and the ravenous lust of a relationship’s early days began to abate, it was adoration that people really wanted. When just being together was enough to make two people happy, that was the real deal.” (page 134)

“Her itchy eyes burned with tears and her lungs with that held breath, her unvoiced scream.” (page 143)

“The past hung between them, an unwelcome companion whose presence would not allow them to speak freely.” (page 154-155)

“Down in the subway, she always felt far too cut off from the world, the air clammy and insinuating.” (page 170)

“Fear had spread through her like a low-grade fever, lingering and threatening to settle in more deeply, and she didn’t like being afraid.” (page 171)

Words I wasn’t quite up to snuff on:

Either I wasn’t familiar with the word or was confused by its usage. I love increasing my vocabulary and will try to find ways to use these words.

Wan (page 5) (of a person’s complexion or appearance) pale and giving the impression of illness or exhaustion. “She was looking wan and bleary-eyed”

Verisimilitude (page 18) the appearance of being true or real. “The detail gives the novel some verisimilitude”

Psychomanteum (Page 67) This word has no real definition. I honestly don’t know if it’s real or the author just made it up. In the book it’s some sort of mirrored object, large in size, that was used in a ritual to raise a demon.

Muzzy (page 147) unable to think clearly; confused. “She was shivering and her head felt muzzy from sleep.” I like this word.  I’d call it an onomatopoeia ( A word that sounds like what it is.)

Intuit (page 175) Verb. Past tense: intuited; present participle: intuiting. To understand or work out by instinct. “I intuited his real identity.” I kind of figured this one out, seeing as it sounded like intuition, but don’t recall seeing it before.

Baleful (page 194) Adjective. Threatening harm; menacing. “Bill shot a baleful glance in her direction.”  I have to admit I dislike this word. To me, it’s the antithesis of an onomatopoeia  Baleful sounds like it should mean mournful or sad, not menacing. What’s up with that?

Susurrus (page 223) Noun. Whispering, murmuring, or rustling. “the susurrus of the stream.”

Unmoor (page 259) To release the moorings of (a vessel). “The ship was ready to be unmoored” To cause to feel insecure, confused, or disconnected. “The loss of his wife has unmoored him.” I I’d heard this word before but never in an un-nautical context. In the novel the sentence is “Destroy the construct, unmoor the spirit.”

Subsumed (page 291) Sumsume (Verb) Past tense: Subsumed. To include or absorb (something) in something else. “Most of these phenomena can be subsumed under two broad categories.” Ok, I’ll admit it. I’m a little muzzy on the difference between consume and subsume.

The ending was pretty good but I’m left wondering what happened in the following days, especially after the bombshell on the last page. I mean, really, is no one going to notice the changes in Lili? Tess, the main character, didn’t really have an arc. She’s the same person on page one as she is on the last page. Just a chapter more to give me an idea if the events of the book changed her would have been appreciated.  I think I’d preferred the book if Kyrie (her ex-husband’s girlfriend) had actually died. I was a little disappointed when she lived. (Sorry, Kyrie. C’est la vie.)

Seems like there’s room for a sequel, especially given the last page bombshell. When something that dramatic happens, I think most of the story is in the aftermath and how it impacts the participants.  There’s meat there to be explored.